Over the last few years I’ve felt a tug on my heart around Easter. Not the usual tug of simple remembrance, but a real tug like God wanted me to know something.

I’ve known the meaning of Easter for as long as I can remember. I’ve gone through the motions, but it’s only been recently that I felt God seem to say, “I want you to hear my son’s story. I want you to feel deep compassion for Christ who came to save your life on the cross.”

I have watched The Passion of The Christ many times. It’s pretty easy to see those scenes and to think, “Wow this is terrible. Oh my goodness. Lord have mercy on him.” etc. But I really wanted to get into the word and into the things that Jesus said and did leading up to and during his Crucifixion and also when he rose again in glorious victory.

As painful as it was, it was supposed to happen.

Yet it was our grief he bore, our sorrows that weighed him down. And we thought his troubles were a punishment from God, for his own sins! 5 But he was wounded and bruised for our sins. He was beaten that we might have peace; he was lashed—and we were healed! 6 We—every one of us—have strayed away like sheep! We, who left God’s paths to follow our own. Yet God laid on him the guilt and sins of every one of us! – Isaiah 53:4-6

For God loved the world so much that he gave his only Son so that anyone who believes in him shall not perish but have eternal life. – John 3:16

It was God’s will that his son die for our sins. It was this way from the beginning. It’s hard to believe that the purpose of one’s life would be to die, but we NOW know that he didn’t die and that he LIVES! So thankful for his Spirit living inside me.

The devil must really have been laughing to himself as this went down, but you know I think God was probably snickering himself. This terrible scene lead to the salvation of the WORLD. Hallelujah!

How human does this make our Savior! I’m not the only one…

He took Peter, James, and John with him and began to be filled with horror and deepest distress. 34 And he said to them, “My soul is crushed by sorrow to the point of death; stay here and watch with me.” 35 He went on a little farther and fell to the ground and prayed that if it were possible the awful hour awaiting him might never come. 36 “Father, Father,” he said, “everything is possible for you. Take away this cup from me. Yet I want your will, not mine.” – Mark 14: 33-26

He walked away, perhaps a stone’s throw, and knelt down and prayed this prayer: “Father, if you are willing, please take away this cup of horror from me. But I want your will, not mine.” 43 Then an angel from heaven appeared and strengthened him, 44 for he was in such agony of spirit that he broke into a sweat of blood, with great drops falling to the ground as he prayed more and more earnestly. – Luke 22:41-42

Jesus wanted the fear and impending circumstances to go away if it was God’s will. He feared so much he sweat blood. I have been in some serious fear before, but never sweat blood. His was completely warranted I would say.

I love that he said “I want your will, not mine”. Thank you God!

This is how much he loved us.

A man that loved a broken world, DIED for us so that we may live. I get goosebumps just thinking about it. When we’re wallowing in lack of self-worth we should always remember that there is One who loves us so very much that He sent his only son to die for us.

With Easter coming up, let’s really try to grasp this.

And let’s also grasp the JOY that came with the Resurrection of that same selfless man! He is alive! Not even DEATH could hold down the Savior. He overcame so that each and every one of us can overcome.

I have told you all this so that you will have peace of heart and mind. Here on earth you will have many trials and sorrows; but cheer up, for I have overcome the world. – John 16:33

I adore this verse. Makes me think of Jesus as saying, “Hey, you’re gonna go through some crap, but don’t lose heart, I’ve overcome the worst for you!” 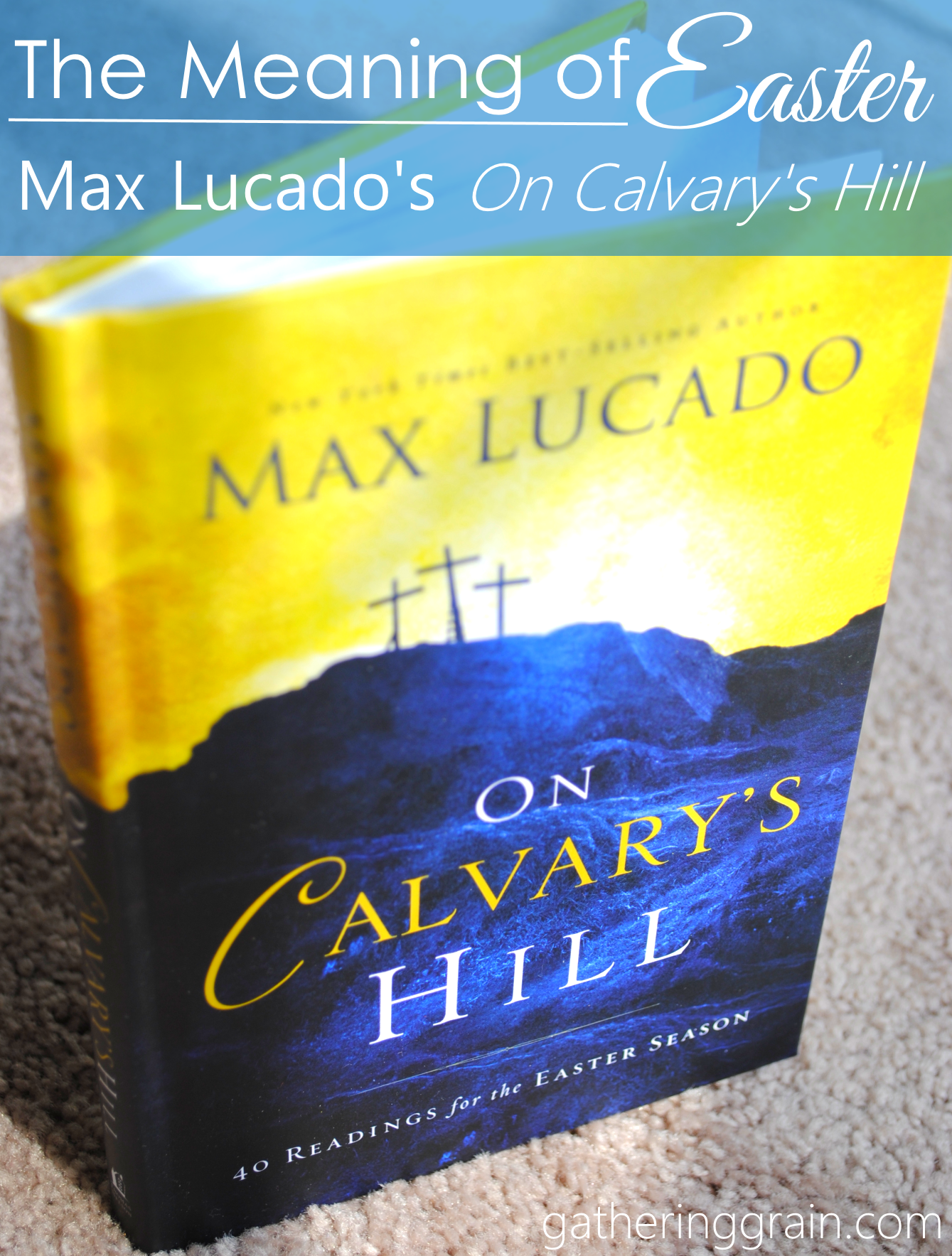 If you’re really wanting some great reading leading up to Easter this year, I have just the thing for you. My favorite author, Max Lucado has a great little companion for getting into the season. On Calvary’s Hill is 40 readings for the Easter Season.

It’s a compilation from several of his books that relate to Easter and what happened to Jesus during this time. It has got some really great stories and goes into pretty much every aspect of the Crucifixion and Resurrection story. But with an awesome Max Lucado twist, of course.

I especially love that it’s excerpts from so many of his awesome books. Put together they tell the incredible and redeeming story of Jesus Christ.

It’s goooooood stuff y’all. I’ve been trying to read one per day leading up to Easter Sunday. 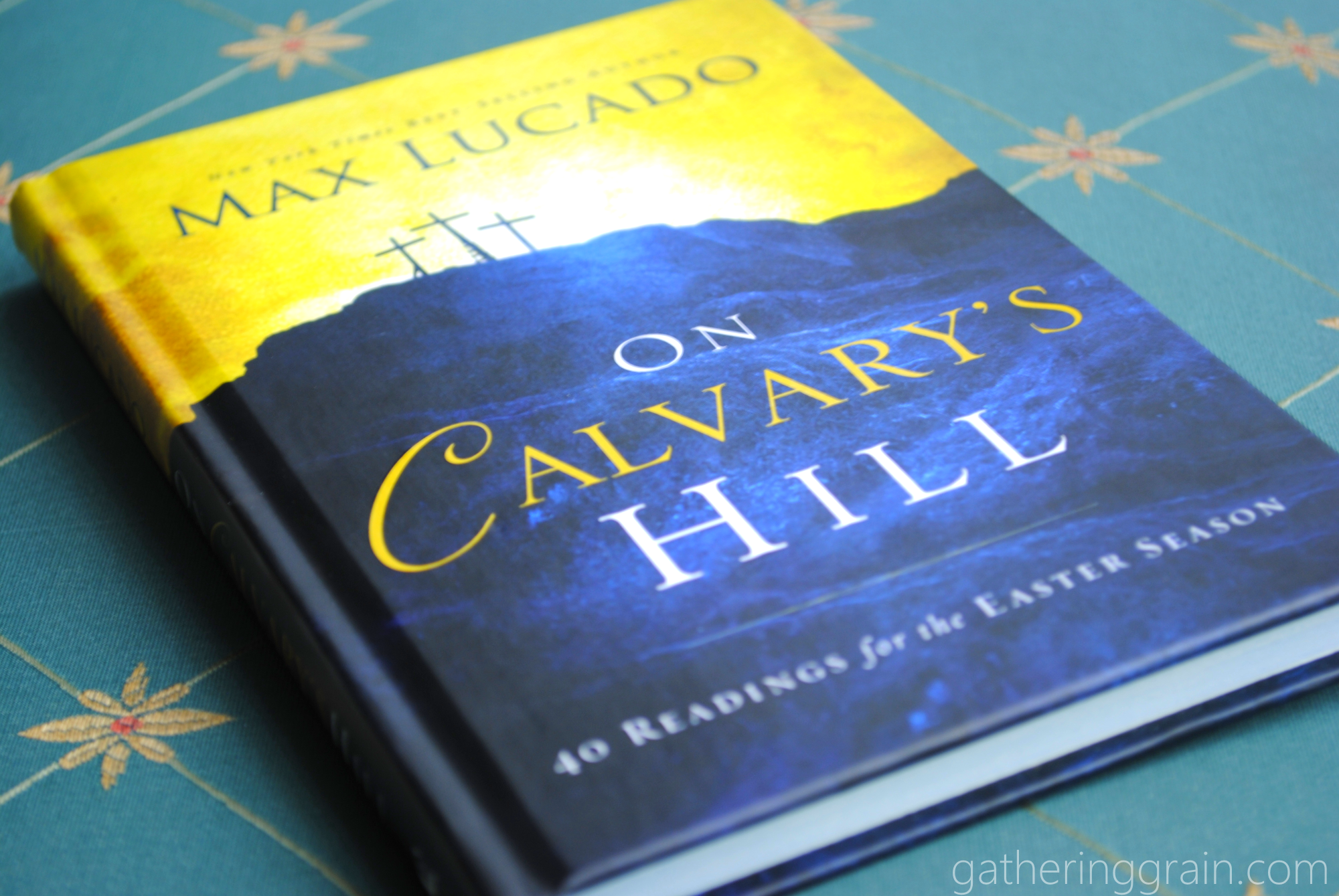 You can get a copy of One Calvary’s Hill by Max Lucado at Family Christian for $9.99! Makes a fantastic gift idea.

OR you could win the $10 Family Christian Appreciation Certificate and buy your own copy! Enter my giveaway below.

This giveaway will end on March 25th, 2015 at 11:59pm CT. I was given a copy of this book for review purposes by Family Christian. All opinions expressed are 100% my own.