Have you seen War Room yet? It was in theaters for a looooong time and I am so glad that it was. Quite possibly one of the best Christian films of all time, it seems to have spurred a new awakening to prayer.

Rejoice always, pray continually, give thanks in all circumstances; for this is God’s will for you in Christ Jesus. – 1 Thessalonians 5:16-18

Prayer is the center of our very relationship with the Father. One of the most important things that I’ve learned about prayer is that our struggle isn’t against flesh and blood, but against the rulers, the authorities, against the world powers of this darkness, against the spiritual forces of evil in the heavens. (Eph. 6:12) The way to fight the wars of this world is with prayer.

That’s why I was so excited to see War Room come out in theaters! What a powerful message it conveyed. What an awakening it seemed to reveal among Christians. You don’t have to have all the answers or figure it all out.

He will listen to you.

There are countless verses about prayer in the Bible. It is an important weapon against evil and Jesus wanted us to know that!

When War Room came out, the first thing I did was try to figure out where I could make a “war room”. I couldn’t think of a place. Our closet is pretty big, but honestly, it’s never clean enough to count on it as a usable space. And I loved the movie, but there is no way I can empty out my closet like the lady did on the movie! Don’t get me wrong, I LOVED her space and all her notes and verses. I just don’t have the space to put the things that belong in my closet.

I just want to encourage you in that if you don’t have the “perfect” place for a war room, do not fret. A war room or prayer closet can be anywhere where you can go to be alone with God. It could be your bedroom after the kids go to bed. It could be your back porch.

For years, my husband told me that he was having trouble finding good alone time with God. I finally asked him what he does with his commute. He drives about 45 minutes each way to work. He said he listened to podcasts and the Daily Audio Bible. That’s great! But how perfect is a long car ride. It’s like being in a silent bubble for 45 straight minutes. God can use that! The best thing is that it’s built in time. No need to make room in your day.

His war room became his car.

Use what you have, but make it intentional. Go to WAR with the evil forces and storm the gates of hell with prayer. 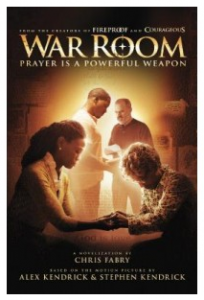 And guess what?! War Room is available to pre-buy right now! It comes out December 22nd!!

Watch the trailer below and go ahead and pre-buy your copy for just $14.99 at Family Christian!

With your pre-buy purchase you will get a FREE devotional journal along with it! Now is the time!

Who wants to win $25 to spend at Family Christian online or in-store? Simply leave a comment on this post!

This giveaway will end on Wednesday, December 23rd at 11:59pm CT. I will use And the Winner is plugin to choose a winner after the giveaway ends.

This is a sponsored post written by me on behalf of Family Christian. All opinions are 100% my own.

You know what I’m talking about. The kinda stuff that we see in the movies. The candlelight and flowers, sweep-you-off-your-feet, knock-your-socks-off kinda romance.

What about chivalry? Ha! Haven’t heard that word in a while. The word, which basically means respect, is not something that we hear of happening much anymore.

Too often in our culture, the dating scene and sometimes even the committed can lack in these areas.

Has a man who sends a girl flowers and opens the door for her without an ulterior motive become the minority? It seems that way!

There is such a thing as godly romance you know. That’s called old fashioned these days. Respect, saving yourself for marriage, and prayerfully considering if a husband/wife is God’s choice for you. Not always the norm!

What if you’ve already made bad choices in the past? Are you damaged goods?

God can and WILL redeem your past. All that matters is what you do with your future.

As believers, we should strive to stick to the values that we so strongly believe in. That isn’t an easy feat in today’s society. Have faith and courage, even if it means you’re the weird one. Hey, being old fashioned means you’re unique and completely unexpected. A change from an impending one night stand and fly-by-night romance.

It means that you’re allowing God to guide.

I’m still reeling from a movie that I was invited to screen. Guess what it’s called….

This film was made to touch on the very things that I just mentioned.

Old Fashioned is a faith-based love story about a former frat boy who comes to know Jesus and it changes the way he looks at dating and romance. He meets a free-spirited girl who is quite the opposite. In our modern-day dating scene, they attempt an old fashioned courtship.

My honest opinion? One of the best faith-based movies that I’ve seen in a long time.

This film was a refreshing taste of what love and romance can truly be if God is guiding it. I love that it stayed realistic by addressing common pitfalls like partying, pornography, and sex before marriage without glorifying those things. In fact, this film highlights how God’s grace covers our mistakes and makes us new.

I enjoyed this movie a lot y’all. Even hubby liked it! We laughed, got teary, got angry, and felt connected with the characters. And it even had good acting too! I can’t say that about all Christian movies. There were moments that were a little slow, but what happened next always made up for it.

This would be a fantastic movie for a youth group to see! It would be perfect for singles, and those who are dating, too! And honestly, for anyone wanting to see a true and pure love story.

It hits theaters February 14th, 2015. Valentine’s Day, how fitting! Check it out at OldFashionedMovie.com.

You can find it at a theater near you here. It is at limit theaters, about 200 across the nation. It’s going to be competing with a certain well-known, less-than-Christian film, Fifty Shades of Grey. Let’s support truth instead of a false idea of romance!

I truly hope that you will go see Old Fashioned and that it will bless you like it blessed me! Watch the trailer below.

I was provided with tickets to the screening by Family Christian. All opinions expressed here are 100% my own.